Posted on August 10, 2016 by Vegetarians of Washington 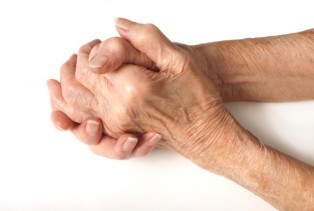 Rheumatoid Arthritis (RA) hurts. Nearly 3 million Americans suffer from it. Rheumatoid arthritis is a chronic inflammatory disorder that can affect more than just your joints. In some people, the condition also can damage a wide variety of body organs, including the skin, eyes, lungs, heart and blood vessels. An autoimmune disorder, rheumatoid arthritis occurs when your immune system mistakenly attacks your own body’s tissues. There is no cure for rheumatoid arthritis. There are treatments, but many have significant side effects.

Following a plant-based diet can reduce your chances of getting RA. One study published in the American Journal of Clinical Nutrition, comparing those who followed a vegetarian diet to those who ate meat but otherwise followed a healthy lifestyle, showed that those following a vegetarian diet reduced their risk of getting Rheumatoid Arthritis 50%. Several studies, of both Americans and people in other countries, show that a plant-based diet can help improve many of the symptoms, such as pain and stiffness, in people who already have the disease. Several studies also show improvements in blood tests that measure the inflammation caused by RA such as C-reactive protein levels and eosinophilic sedimentation rate. Recent research also shows that those who switch to a plant-based diet can change the mix of bacteria in their intestines, which can help lower inflammation as well as providing other benefits. It’s important to keep in mind that while some results can be obtained in a month, it usually takes several months for the full benefit of the treatment to take effect.

Plant-based diets can be a safe and effective part of the treatment of Rheumatoid Arthritis. In mild cases some people may be able to avoid medication. In moderate and severe cases patients often need less medication and lower doses. While doctors are actively researching better medications, and someday a cure, a plant-based diet is something that can help almost all patients today.